The people who grow our food deserve to earn a fair living. But that’s out of reach for poultry farmers who work in an industry where the power of a few giant corporations leaves them trapped in a rigged marketplace, vulnerable to abusive business practices. The good news is we have laws in place to protect growers. We just need to enforce them.

The Truth Behind Chicken

The average American consumes about 90 pounds of chicken each year – more than double the amount we ate 40 years ago. The poultry industry has changed drastically to support our growing appetite, with important consequences for the growers who produce chicken, eggs, turkey and other poultry products.

Since the 1950s, the number of chickens raised in the U.S. skyrocketed by over 1,400%, while the number of poultry farmers plummeted by 98%. The poultry industry is the most concentrated sector in our food system, controlled by large corporations that rule the roost.

The top four poultry firms in the U.S. – Pilgrim’s Pride, Tyson, Perdue, and Sanderson Farms – control almost 60% of the market. That number indicates an extremely concentrated marketplace. To make matters worse, local markets are even more concentrated, which leaves most growers with only one or two companies to market to in their region.

Vertical Integration: Arrangement where a company owns its entire supply chain. Whereas poultry farmers used to own their own chickens, feed, and so forth, in the modern poultry industry the company owns every piece of the supply chain, except for the farms where chickens are raised and the waste they produce.

Flock to Flock: Common term in poultry contracts – similar to a ‘month to month’ housing lease – where the company makes no commitment to provide birds to farmers beyond the current flock. Poultry companies rarely contract for longer durations, and if they do, rarely commit a specified number of birds or flocks per year.

Tournament System: Payment system where farmers are pitted against one another based on performance. The tournament system uses a base pay, and growers who do better than other growers get more than the base, while those who do poorer get less than the base.

In a healthy economy, independent farmers can sell their goods on an open market where there are multiple buyers and where they can negotiate prices for their goods. But for poultry growers, open and competitive markets haven’t existed in a long time.

In 1950, 95% of broiler (chicken raised for meat production) farms were independent. Just five years later, independent farms accounted for just 10% of the industry, with most growers selling their goods under contract with a company.[1] Today’s poultry industry is spread throughout rural corners of the country, organized into local complexes where companies own feed mills, hatcheries, and processing facilities. Companies contract with local farmers to grow birds to market weight, providing farmers with the inputs (feed, chicks, medication, etc.) to do so. But behind that seemingly simple set-up is an extreme power imbalance that gives farmers little leverage to negotiate better contract terms or better treatment from companies.

For example, in order to secure a contract, farmers must invest hundreds of thousands of dollars to build expensive poultry houses. The grower is also on the hook for operating costs like utilities and waste disposal. The whole set up can be boiled down to this: the company owns everything that makes money and the farmer owns everything that costs money. 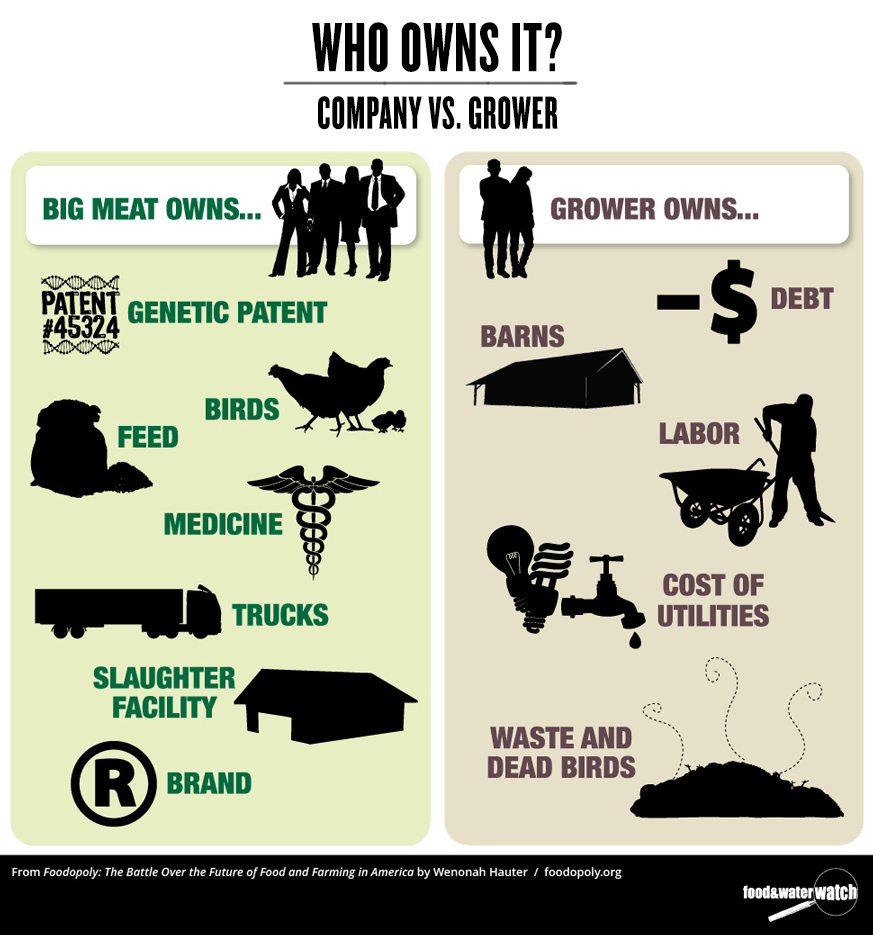 Mired in debt they incur to build poultry houses, farmers are at the mercy of the poultry company. And those companies often undermine their efforts. Most contracts are flock to flock, which companies can cancel at will. It’s also common for companies to require expensive upgrades to farmers’ facilities with little warning, requiring farmers to take on more debt. Growers soon realize they’ve taken on dramatic risk, with little assurance that they can ever dig themselves out of debt.

This is all exacerbated by a “tournament” system that pits growers against one another for pay. After the company picks up chickens from farmers, it ranks the finished flocks according to how well the chickens gained weight compared to the feed they ate. Growers at the top get bonuses for good performance, paid for by pay cuts to growers ranked at the bottom.

But performance is completely out of farmers’ control. The company determines the quality of the chicks and feed delivered to growers. So the game is rigged from the start. In fact, many growers report that companies will deliver sub-standard chicks or feed as a form of retaliation if they speak out about the conditions they face.

The Fight for Fairness

Poultry growers describe a widespread culture of fear and intimidation. Trapped in debt, they have little choice but to accept the company’s terms. If they do choose to stand up or speak out, they risk their contracts – and often their land and homes – in the process. The hardworking families who raise chickens deserve a level playing field in the marketplace. In spite of the risks, more and more growers are starting to speak out. Their message is clear: The time for change is now.

The good news is we already have laws on the books to protect poultry growers. Back in 1921, the Packers and Stockyards Act (PSA) was created to regulate meatpackers, livestock and poultry dealers, and other middlemen in the livestock industry. It contains several provisions that protect individual farmers from abuse and unfair business practices.

Slowly, more and more growers are starting to speak out. Their message is clear: the time for change is now.

The U.S. Department of Agriculture (USDA) is tasked with enforcing the PSA. After a decades-long era of lax enforcement, dozens of poultry growers provided testimony–at great personal risk–urging reform to officials from the USDA and Department of Justice at a workshop about antitrust issues in the poultry industry.

In 2011, the USDA issued a series of rules with stronger protections for farmers and ranchers who contract with meatpackers. Unfortunately, industry lobbyists have pushed Congress to block these rules since 2012 through riders and amendments in various bills. In 2015, Congress finally lifted its ban and the USDA is moving forward with the rules, although their future remains unclear.

Profiles of some of the poultry growers who have spoken out about the abuses in the poultry industry: Karen and Mitchell Crutchfield are former poultry growers in Arkansas who stood up to Tyson after being told to spend $300,000 in upgrades to their farm. They were terminated in March 2012. In 2014, Craig Watts allowed his chicken houses to be filmed, believing common industry practices compromised the safety of chicken sold to consumers. After facing retaliation from Perdue for speaking out, Craig has become a vocal advocate for poultry growers. Mike Weaver, a poultry grower in West Virginia, co-founded the Contract Poultry Growers Association of the Virginias to bring growers together and give them a voice against corporate abuses. Once a top grower for Pilgrim’s Pride, he has been retaliated against and now ranks lower in his tournament.

Kay Doby is a former poultry grower for Pilgrim’s Pride and past president of the North Carolina Contract Poultry Growers Association. Kay fought unfair poultry contracts for 15 years, speaking to Congress and at the USDA. When Pilgrim’s Pride terminated her contract, Kay continued to speak out. She now runs a goat farm.

What is Farm Aid Doing?

Farm Aid works to ensure that poultry growers have a voice in key policy settings and that their stories are told in the media. We advocate for farmers on a national stage and also connect poultry growers who contact us via the 1-800-FARM-AID hotline with resources and support.

Farm Aid continues to champion USDA’s efforts to finish their rules to protect poultry growers. We advocate for rules that: Our friends filming the documentary Under Contract, investigating the contract poultry system, have created this infographic that breaks down the ways a few giant corporations have come to dominate the poultry industry. Click here to download a PDF version.

1. USDA 1999. Vertical Coordination in the Pork and Broiler Industries: Implications for Pork and Chicken Products http://www.ers.usda.gov/media/491410/aer777b_1_.pdf

Click here to download a printable PDF version of this document Reading about this unfair system is enough to make you lose your appetite. So what can you do about it? It turns out, quite a bit...

Craig Watts on Speaking Out and Revealing His True Character