Cities like Cleveland, Youngstown and Pittsburgh in the “Rust Belt” are not the thriving economic powerhouses they once were, but communities there are coming together to grow a new way forward using vacant land.

Urban farming projects, associated with a whole host of positives from fostering and empowering community to producing food for neighborhoods experiencing food insecurity, can easily go south if community stakeholders are not the ones calling the shots. That’s why Jake Seltman, Executive Director of Grow Pittsburgh, says his organizations comes at gardening projects from a very specific angle: they don’t seek unoccupied city plots to start gardens, but publicize their services and let the community approach them. It’s this careful balance that makes Grow Pittsburgh a real model for urban farming.

I got a chance to chat with Jake recently about growing food and building community in Pittsburgh and his organization’s other exciting projects. Read his interview below—lightly edited for clarity.

Jake Seltman, Grow Pittsburgh: We know that farming has a long history here and that many people have strong family histories in agriculture. It’s important for us to first recognize this history and the connection of people to the land. Particularly with African American communities, there’s a strong, powerful history, as well as the history of slavery, and recognizing that history is important to help us do this work in a positive way.

All of our projects are community-driven, from our gardens, to our sustainability fund, which helps existing gardens through infrastructure or education to help them become more sustainable. These projects, while free to the public, require an application and are initiated by community members. So, a lot of our work is outreach and community engagement to make sure folks know about the opportunities.

“Food is the thing that connects all of us…So, the process of growing and harvesting that food is a really powerful tool for community—particularly in cities experiencing new growth or disinvestment.”

These are not Grow Pittsburgh gardens; they’re ultimately run by community members. We believe that’s the most successful way. So, each garden is different. One might be growing exclusively to feed a food pantry, one might be made up of family members feeding themselves, or they could be connected to the YMCA and feeding young people. The people in each neighborhood know the best way to use the garden. We can share what we’ve experienced, but it’s important to acknowledge the knowledge and history of the people on the ground doing the work. Jessica Kurn, Farm Aid: What are the unique challenges to this type of work in Pittsburgh?

Jake Seltman, Grow Pittsburgh: The hills! Finding flat land is a major challenge. We also have a lot of environmental challenges, like soil quality. Much of the land that could be best used for farming used to be a house or a building, so testing the soil for lead and other heavy metals is something we have to overcome first. Once we pass that barrier, we figure out how to build the soil to be nutrient rich enough to grow that food.

Jessica Kurn, Farm Aid: Has the City of Pittsburgh been helpful?

Jessica Kurn, Farm Aid: Give us a sense of the Pittsburgh neighborhoods where most of your work happens.

Jake Seltman, Grow Pittsburgh: One is Braddock. Braddock was one of the biggest steel towns just outside of Pittsburgh, along the water. And there’s still a working steel mill. There’s a major loss of population and disinvestment there, so it’s a poor region. They don’t have a grocery store in the area, so the farm stand at Braddock Farms is one of the only ways to access fresh fruits and vegetables during the year. There are now many community gardens too.

We also work in the Point Breeze and Homewood neighborhoods, which are interesting. Our farm stand is in North Point Breeze, which is the border between the two. This area is a more affluent neighborhood, while Homewood is a poor, predominately Black neighborhood. So, issues around loss of jobs, poverty, and racism are hitting the neighborhood of Homewood. Jessica Kurn, Farm Aid: Urban farming seems like a growing trend, particularly in cities where land isn’t very expensive. Why do you think it’s taking off?

Jake Seltman, Grow Pittsburgh: We think about resiliency and community pride and connection, and I think that food is at the center of what it means to be in a community. Food is the thing that connects all of us. It connects us to our history and family traditions and to our neighborhood and neighbors. So, the process of growing and harvesting that food is a really powerful tool for community—particularly in cities experiencing new growth or disinvestment.

Depending on what’s happening in our city, we can always come back to food and farming as a core grounding element in supporting healthy communities. It’s not a new idea, and it’s important to recognize we’ve been growing food in cities for many years, but now maybe we’re coming back around as we see all of the health, environmental and social benefits that gardens can have on our neighborhoods. 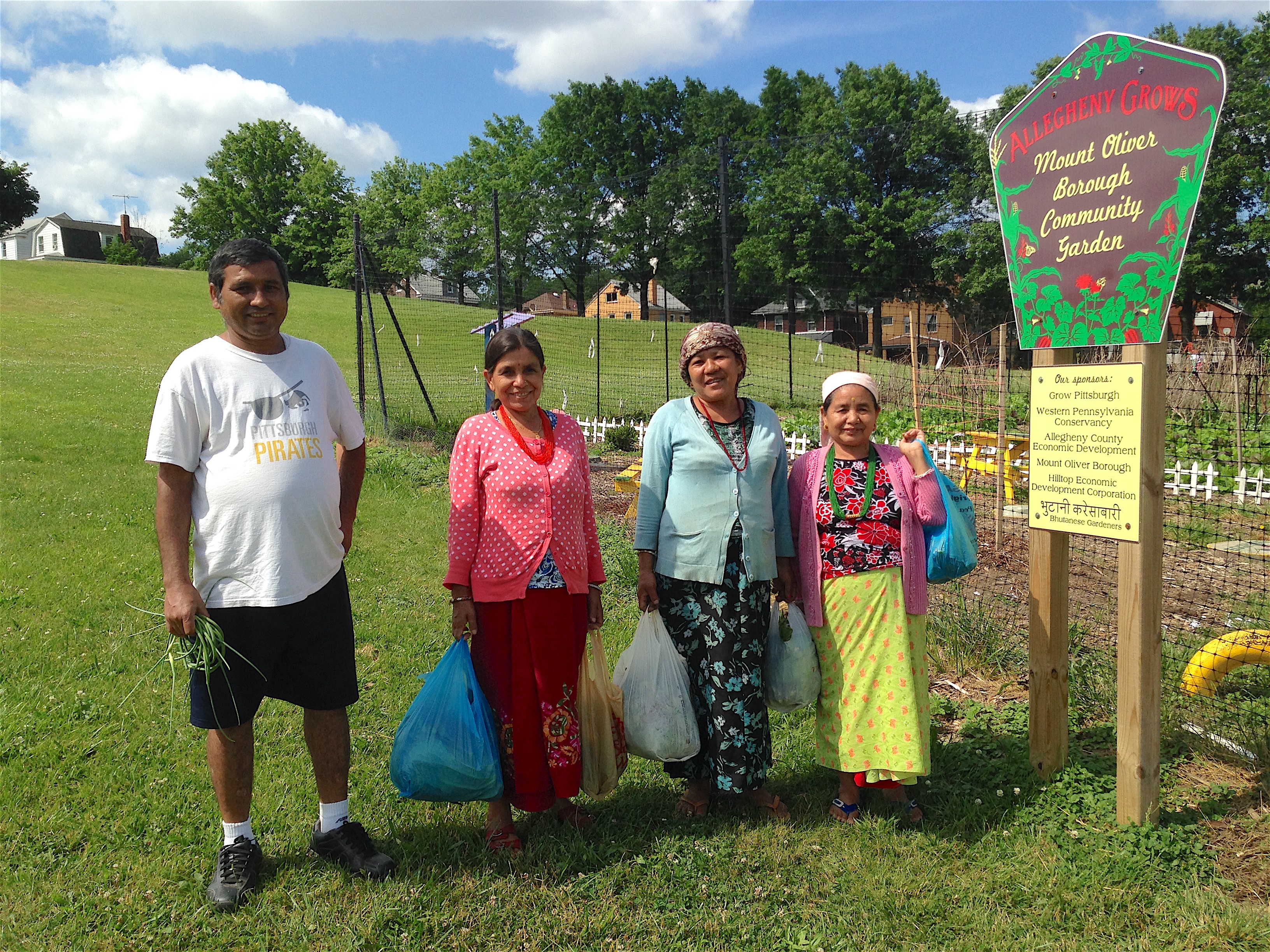 Jessica Kurn, Farm Aid: It sounds like a lot of hard work. What keeps you motivated and inspired?

Jake Seltman, Grow Pittsburgh: For me, it’s the people. I really see growing food as a vehicle towards transformative change and social impact. I’m inspired when I go into a garden and see a kid and they say, “I never knew nature could taste this good,” and seeing them light up with the lettuce that they grew. Or talking to community members who are so excited that they can start their own garden.

A new project we’re starting now is a partnership with the Allegheny Land Trust to s preserve land for urban agriculture in perpetuity. We’re creating a steering committee that will identify land to be protected under this initiative and we’re calling it the Three Rivers Agricultural Land Initiative. That motivates me because I go to community meetings and their main concern is land tenure and investing in land that is insecure. I like being able to help support communities prioritize urban agriculture and to see that it is an asset worth preserving, not just in the short term, but for the long term. Those kind of personal connections and interactions are what motivated me the most.